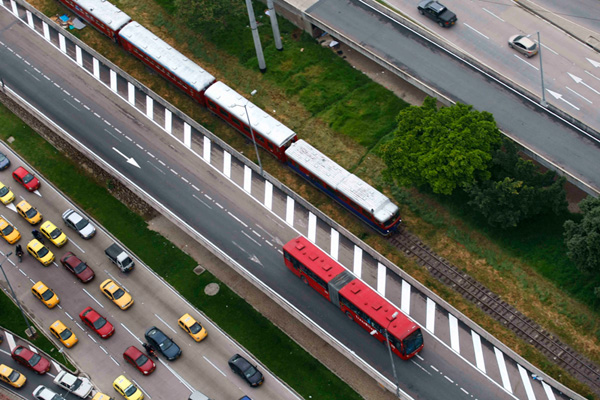 In this era, when the city was a little more than one million inhabitants and had 8,000 hectares, the service was relatively reasonable and comfortable. But as the city grew to reach over five million and an area of ??over 30,000 hectares, not only substantially increased the fleet to more than 20,000 vehicles, but multiplied anarchy, chaos, inefficiency, inconvenience and pollution.

From the 60s to the 90s, public transport runs, for the most part, on behalf of private entrepreneurs, so anarchic, uncomfortable, expensive and unsustainable and that since the mid-80s and, especially, the late 90, makes crisis.

This crisis is the result of the simple extension of the city"s increasing population and number of vehicles maintained road infrastructure of the time.

By the end of the twentieth century the situation was critical. There was no real public transport system to serve as an alternative to private vehicle - which further incentivized use - and the city recorded low levels of competitiveness throughout Latin America and unsatisfactory quality of life for the vast majority of its inhabitants.

The administrations of mayors Andrés Pastrana (1988-1990) and Jaime Castro (1992-1994), plus the first of Antanas Mockus (1995 - 1997), made proposals to solve the problem of public transport, with limited results. It was during the latter"s mayor when he spoke repeatedly of the possibility of a mass transit system that would help to remedy the problem of mobility in Bogotá.

Mayor Enrique Peñalosa (1998-2000) included in its program of government, as a priority project, the city offer a solution to the problem of public transport. Consequently, the implementation of the development plan for the Bogota we want in terms of mobility and concretely to project mass transportation system, was determined to build a special infrastructure designed specifically and exclusively to its operation, to from specialized trunk corridors, equipped with single-use lanes, stations, bridges, bike paths and pedestrian access special squares, designed to facilitate use of the system to the user.

Accordingly, and based on studies conducted during the first administration of Mayor Antanas Mockus by the Japan International Cooperation Agency (JICA), which determined that the meter was not the most convenient in the short term, for only fifteen or twenty years would require a line and that its cost was ten times greater than the articulated buses alternative, it was decided, as the solution to the problem of public transport creating TransMilenio System, based on four pillars:

1. Respect for life, represented in a comfortable, safe and modern.

2. Respect people"s time, with a transportation system that meets minimum quality standards in terms of routes and travel time.

3. Respect diversity of citizens, as would become a transportation system in which different social classes converge without preference of any kind and, conversely, equal treatment.

4. International quality, meeting the minimum requirements outlined by the transportation engineering to provide a comfortable, safe and effective.

After quite a few drawbacks, including opposition from some councilors and transport companies, the Bogota Council approved the project for the establishment of the agreement through April 1999, which authorized the Mayor, on behalf of Bogotá, to participate jointly with other entities at the district in the constitution of Transportation Company Third Millennium, TransMilenio SA, issued on October 13, 1999 as a joint stock company, in the form of commercial corporation with public input.

TransMilenio SA is the managing body of the system, the body responsible for coordinating the different actors, plan, manage and monitor the provision of public transport urban passenger mass, and is responsible for the efficient and continuous service. Thus, the December 18, 2000, opened the first route that began operating with 14 buses between eighty-sixth streets by the trunk of Caracas. During this period were delivered trunks: Autonorte, Calle 80 and Caracas.

In the second period of administration of Mayor Antanas Mockus (2001-2003) included in the development plan Bogota to live all on the same side, the goal of reducing by 20% the time of movement of people in the city and projects priority were the three new mass transit trunk: Americas Avenida NQS and Suba.

Currently the system has 115.5 Kms of track in core operating, operating stem 11, 131 stations, nine portals and 9 yard garages. Mobilizes 1,926,985 passengers daily average covering 30% of the demand for public transport in Bogotá. Furthermore the system is served by nine cicloparqueaderos with 2,187 posts in total. Spaces safe, comfortable and accessible to all who use bicycles as an alternative transportation formal daily mobility.

TransMilenio System benefits for the city and its inhabitants are undeniable: there is less pollution and more security; were improved significantly sectors were badly damaged city, the accident rate decreased, decreased travel times and improved quality of life of all citizens.

Under the Mobility Master Plan, the chart of the city on the issue, set the structuring of new Integrated Public Transit (SITP) as a tool that is guaranteed to improve the quality of life of citizens, optimizing service levels for trips made in the city. The SITP is an organized and integrated different transport services (Urban Special Supplementary Trunk, Feeder and other modes of transport that will be implemented) seeking effective transport coverage in Bogota.

In the same line which at the time meant the implementation of the TransMilenio System, today established itself as a world leader in mobility, the SITP from a gradual and controlled implementation will change the history of the city ensuring coverage of 100 % in the provision of public transport, integrated operation and the rate will generate benefits for particular populations, adjusted technologically current fleet, will have a single means of payment via smart cards and handle stops set for the arrival and departure of passengers, among others.

TransMilenio SA, as District, is the managing body of the SITP, and ensure its operation to provide quality, efficient and sustainable public transport demand in the city of Bogotá DC.